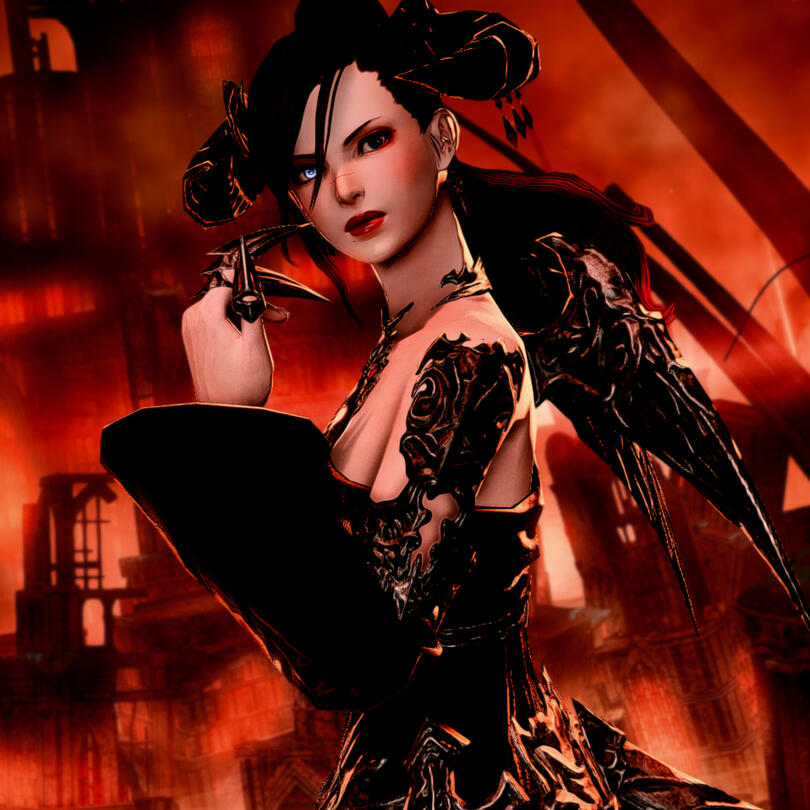 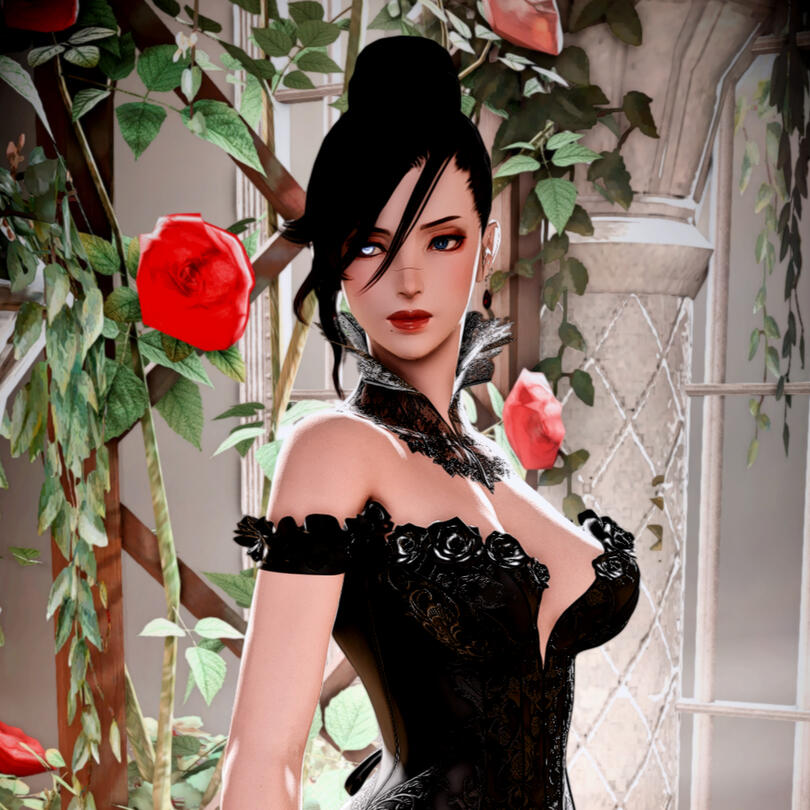 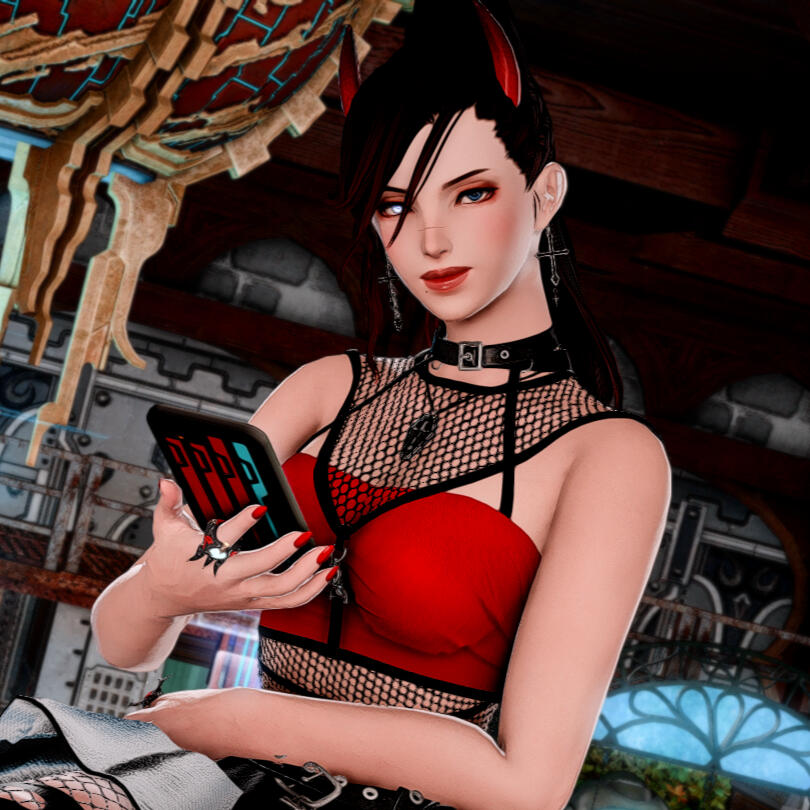 The true story of Diavola Blackheart... Born and raised in Ala Mhigo, Diavola was orphaned at the age of five, her parents early targets of King Theodoric's reign of terror. She spent most of her childhood growing up destitute in a refugee camp in the barren deserts of Thanalan, just outside Ul'dah. As a youth, she made a name (and some coin) for herself working as a pickpocket and hustler in the back alleys of the city, learning quickly how to keep food in her belly and clothes on her back.Diavola became a natural leader in her adolescence, and took to looking after the other refugee children in the camps. She helped them with food and shelter, but also taught them the skills necessary to navigate life in the streets as safely and as morally as possible: including foraging for herbal medicine, purifying water and taking only what they need to survive until they could earn a living on their own.

As she grew into womanhood, Diavola discovered that pilfering goods from merchants and scrounging for day-old bread wasn't the most efficient way of gathering coin for an attractive young lady. She began working as a street performer, using her siren's song and feminine wiles to draw in men and women from all ports of call, who were searching for entertainment or a beautiful companion for the night.After one particularly inspiring performance, Diavola was taken on an unexpected voyage to the Far East, aboard a privateer ship called the Rothschild. After becoming separated from ship and crew in Kugane, she was taken in by an okiya in the city, where she lived and worked for several years to earn her passage back home. When it came time to return west, Dia made her way home across land and sea, taking mercenary jobs and saving the coin she made while dreaming of a better future.

One final job brought Diavola back to Ul'dah, where she attempted to "retrieve" a valuable artifact from the Thaumaturge's Guild. She was caught leaving with the item in hand, and in the resulting scuffle, she discovered a strong affinity for manipulating aether to her will. Cocobuki was amused and intrigued by this young spitfire merc, and took her under his wing as his personal protégé.Diavola joined the guild and studied hard, eventually becoming a mage of considerable talent. Once her magical tuition was complete, she devoured books on music, art, dance, cuisine, politics and history, striving to educate herself on everything she could about Eorzean culture. She used this knowledge to climb social ladders and curry favor with the social and political elite, vowing to lobby for the rights of refugees like her and never return to living in poverty again.

After completing her official studies with the guild, Diavola's grasp of magic continued to strengthen, and she began to explore the darker side of thaumaturgy, eventually becoming a fully fledged black mage. In one particularly harrowing ritual facing the primal Ifrit, her right eye was irreparably damaged by her own out-of-control magic, leaving a deep scar across her face. While she maintains sight, her eye remains an icy, ethereal blue color, several shades lighter than her natural deep sapphire hue.Regrettably, Diavola's mastery of thaumaturgy never returned to full strength. Desperate to get back what she had lost, she trained with experts from every school of magic, eventually going as far as examining voidsent and even primals. She dissected the source of their immense power, hoping to find a path back to her own. Instead, that knowledge lead her down a different path of magical attunement, that of the summoner.

After her powers stabilized, Diavola spent most of her time exploring Eorzea. From the bustling streets of Limsa Lominsa to the deepest forest glades of the Shroud, she traveled far and wide adventuring and acting as an entertainer and personal companion to Eorzea's elite. She advocated for the Ala Mhigan refugees everywhere she went, and utilized the contacts she made to weave a web of political influence, gaining access to members of the ruling Syndicate in Ul'Dah, and working closely with the Scions of the Seventh Dawn.Diavola's participation in the liberations of both Ala Mhigo and Doma garnered no small amount of negative attention from Garlemald, sparking rumors that she consorts with voidsent, primals and other dark entities. Looking forward, with both nations freed and the Empire's power diminished, Diavola turned her attention closer to home, looking into new business ventures while supporting the Eorzean Alliance.

While she still spends a lot of time adventuring, Dia has amassed a sizeable personal fortune over the years and put down some roots, splitting her time between Eorzea and the Far East, where she invests said fortune in several mercenary companies who focus on Anti-Imperial work.When she is in the West, Diavola is a regular fixture at the Wolves' Den and in Frontline scrimmages, where she is said to all but raze the battlefield any time she sets foot across "enemy" lines. She also spent several months in Ishgard, studying with a cadre of renowned machinists to learn their way of life, giving her options outside of the schools of traditional magic to defend herself and her allies.However, most recently her eternal wanderlust got the better of her, and the call of distant lands became too irresistible to ignore. Dia is currently journeying to Radz-at-Han and Thavnair in search of new and inspiring cultures and people. There are many rumors surrounding Diavola Blackheart. Is she a vampire? A succubus? A voidsent? Or is she just a sorceress obsessed with self-protection at any cost? Maybe you're a demon hunter looking for your next kill? Or an investigator sent to find out the real story?

The Politics of Dancing

Diavola is a fierce refugee rights activist and uses her influence to lobby the Ul'dah Syndicate to pass assistance programs. This put a target on Dia's back with more conservative members of the council. Will you join her in the fight for refugee rights? Or has the Syndicate sent you to silence her?

As a child, Diavola was found wandering the streets of Ala Mhigo during the Mad King's reign of terror, covered in blood and tears. She was swept away in the refugee exodus, and taken to the camps in Thanalan. Are you also a displaced Ala Mhigan? Or perhaps you have information about Diavola's legacy?

The Dark Rose of Ul'dah

Before Diavola turned her focus to entrepreneurial pursuits, she was a lauded performer and courtesan entertaining politicians, nobility and royalty around the world. She amassed a small fortune this way, which she has invested to support her business ventures and social causes. Have you seen her perform? Maybe you're a former client of hers? Since her time living in Hingashi, Diavola has felt a keen affinity toward the story of Suzaku. The Vermillion Lady's undying love for Tenzen, and the burning rage and anguish she lived with after his death struck a chord with Dia, who has lived with a deep sense of nostalgic yearning and grief for almost her entire life. Her chocobo, Phoenix, carries a name inspired by this aspect of fire and passion.